A lot of the people we speak to about Twitter are at the same point in their relationship with the microblogging platform: they know they want to use it, they get that it’s useful, and they’re excited about having made the bold decision to go live. But then they stall, because they have nothing to say. One client described his early steps on Twitter to me as being like standing up to make a speech, only to realise you have no words.

Assuming you’ve decided to embrace Twitter, how do you decide what to say if you’re not particularly social media-savvy? The key to knowing what to tweet is related to your brand strategy: who you are, how you want to be perceived, and the nature of your audience. And when you understand that, you can start to find your Twitter voice. When we talk about Twitter voice, we mean both what you tweet and the tone you adopt on your Twitter feed (we’ll examine some different voices in this blog).

As with any marketing communications exercise, a bit of planning goes a long way, and before you think about what to tweet, it’s important to understand why you’re tweeting in the first place.

But let’s take a step back for a moment and think about something you can do in the early stages of your planning that might save you some time and hassle, and will certainly help you to channel your thinking.

Check out the competition

It might be seem obvious, but before you get a company account, get a personal one and start following your competitors, brands you admire, companies you’ve heard provide good customer service, and so on. This legitimised “snooping” on other accounts is the sincerest form of flattery – you can learn what you like and what you don’t like from others. Ask your friends, colleagues and family to recommend their favourite Twitter accounts, and ask them why they like them. It’s not too difficult to compile a matrix of competitor accounts, and make a note of the kind of content they tweet, and how often. A simple spreadsheet will do it.

Okay, so let’s go back to thinking about why to Tweet, which is an important consideration in finding your voice.

Have a look at several different companies’ Twitter feeds and you’ll notice that each has its own tone of voice, style and “flavour”. Perhaps we should think about the Twitter Triangle at this point.

The “Twitter triangle” may sound like a mythical zone where tweets vanish forever, but the truth, sadly, is more prosaic: it’s simply a useful tool to help would-be tweeters determine their tone of voice. It was used by Bruce Daisley, currently VP of Twitter Europe, to describe how businesses can use Twitter for their marketing. Here it is: 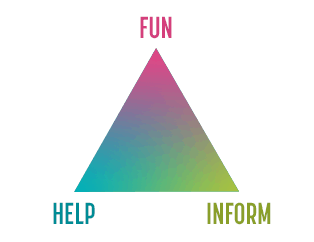 Daisley suggested that you should adopt any two of these styles in your tone of voice on Twitter. A fun exercise, if you have time, is to identify some Twitter accounts you like, and decide how they fit into this model.

For clarity, in this context, “help” refers (broadly) to customer service. “Inform” is about posting useful content, educational articles, news and so on. Hopefully, “fun” needs no explanation. Promotion is a given here. Twitter is a great promotional platform, and, although what you promote and how you promote it will vary depending on your product, service, brand and tone of voice, you would expect to see “plugs” for services or products on Twitter.

Similarly, how you split your content share between these three functions also depends on your brand, service, product, sector and audience.

It’s worth pointing out that some brands ignore the Twitter Triangle and just do everything! But if you push Dailey’s point to a logical extreme, I think what he’s saying is that strong brands shouldn’t try to be all things to all people on social media. Brand confusion is a real thing, and it’s deadly: people like to know what they’re getting. I wouldn’t expect serious cultural commentary from @Join_Dave, the Twitter feed of broadcast channel Dave, any more than I would expect amusingly nonsensical infographics from BBC Radio 4 Today, (@BBCr4today) the feed of the flagship news station, and a byword for dogged political journalism.

Before you decide what function your tweets will fulfil, you need to define your audience. Who are your followers going to be? Who are your customers, prospects and their likely peers? What do they want; what do they need? The nice thing about any form of communication is that there are some rules of thumb you can apply to everything. And the need to understand your audience before you say or write anything is one of them. As with web copy, so with brochure copy, blogs, Twitter, Facebook and more: you need to understand your audience before you do anything.

So if you apply the Twitter triangle to your desire to create an engaged community of prospective buyers of a youth product, you would (to put it very simply) do some background work to understand that community and their drives, wants and needs, and create your personas accordingly. Using those, you would decide whether the split of content needs to be a mix of, say, fun and useful information, or fun and customer support, or whatever (this would depend on your product or service). If you’re going to build an engaged community, for example, you might do it through humour if that is appropriate to your brand, and through sending out useful information. Your brand, combined with your reasons for tweeting, will help to form the foundation of your voice – of what you tweet, and how.

If in doubt, just apply some logic about your audience – who they are and what they want. This is why it’s a really useful exercise to create audience personas before you build your social media channels (or website, or anything else). We’ll come back to personas one day, but actually, creating audience personas is relatively simple.

So. We’ve thought about why we’re tweeting, who we’re tweeting to, and our brand. We’ve seen, briefly, how the Twitter triangle can help you to reconcile these ideas to produce a voice, including tone and mix of content. Now let’s look at some examples.

Here’s the ever-silly Dave (@Join_Dave) celebrating #WorldAnimalDay as only Dave can, with the emphasis firmly on FUN! (The feed also provides information about up-and-coming programmes, promotions and so on, so it has a fun/informative voice).

Happy #WorldAnimalDay! To celebrate here are some better names for animals pic.twitter.com/pTZzpTcIFh

As a TV channel, Dave is the self-proclaimed “home of witty banter”, and its affectionately irreverent Twitter feed publishes promotional items about new shows to an engaged audience. Its Twitter masthead proclaims, “Warning: Following us will probably result in a 30% dip in your productivity.” LOLS all around.

As a delivery platform, Twitter is all about short-and-sharp messages, so is well suited to “personality” brands that establish a kooky, warm, clubby dialogue with their followers, effectively creating a massive online fraternity. But remember, those brands thought carefully about how to approach the market in the first place, and their “personality” is no accident.

A different brand, and a different feed: here’s British GQ Magazine’s feed (@BritishGQ) being informative in a way you’d expect from a stylish men’s magazine aimed at the ABC1 segment with an average salary of £90K.

…and finally, here’s one of our favourites, Innocent drinks (@Innocent), sharing a joke. Innocent has fun on Twitter, while posting a lot of news about promotions and giveaways. The brand is very engaged with its audience and its social team has a good sense of humour – joke with them and they’ll joke back. It’s banter all around, but clean, as you’d expect from a brand associated with healthy products.

Here’s a terrible joke for you:

“I applied for a job making sandwiches, but the roll had been filled.”

Write a tone of voice document

Another tool that’s useful when finding your Twitter voice is a tone of voice document. When we create brands for clients, we produce detailed tone of voice documents and go through an in depth process to help them nail their voice. You can use a much-simplified version of this to create a Twitter tone of voice. Templates abound on the web, and here’s a typical one:

We’ve tended to focus here on some of the more fun brands, simply because they’re more fun to write about! However, the same rules and tools we’ve written about here can apply to any Twitter feed for any company in any field. Some feeds (for example) will be more scholarly and serious in tone, and could tweet articles and research, whilst acting as a feedback mechanism for engaged followers. And don’t forget that in recent years, Twitter has become a news-breaking platform with considerable clout.

Ultimately, the key to finding your Twitter voice is to be true to your brand identity, and to share relevant and interesting content that your audience will want. And don’t forget, you can ask your audience questions too: one of the great advantages of social media is that it shortens the feedback loop.

Twitter is a great platform. Informal though it may seem, brands that use it well have thought carefully about how and why they’re doing so.

If you need help with any of your social media, or finding your voice for Twitter or a brand, get in touch!

The Art of the Elevator Pitch

Why you should incorporate video into your content marketing strategy

Speaking up for your brand: Optimising your company’s website for voice search

Brand advocates can benefit your brand, boost your marketing campaigns and extend your reach – and to get it right, companies need to make sure that social proof is embedded across their processes.

Content marketing is one of the most important marketing tools available for companies, and it works for businesses in all sorts of sectors – yet we often find that companies come unstuck when it comes to thinking of ideas of what to write about.

Why you should incorporate video into your content marketing strategy

There are many ways in which video content can deliver value as a marketing tactic. The key, as with all marketing activities, is to have a clear idea of what you want to communicate and what you hope the video will achieve.

We can help you find your

Want to meet the team behind the blog?
We love to talk marketing, so…

This site uses cookies. Cookies help us remember your preferences (such as hiding this message) and understand how people use our website (analytics). To find out more on controlling your cookies, visit the ICO. You may also want to check out our Privacy Policy.That's fine